Curing the COVID Blues with a Blue-Fronted Amazon (and Friend!) 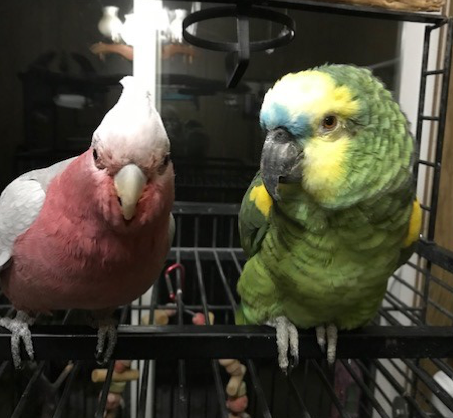 When my husband and I were married in 1995, it became “his birds, my birds, and our birds” – as well as his aquariums, my dogs, our miniature horses.  Through the years our flock evolved, and in 2019 our last African grey passed.  After about a year, I told John that I still missed Sheba’s whistles and vocalizations.  Come to find out, he missed our greys as well – perhaps that’s why her clean but empty cage still stood in its spot a year later.  Further discussion led us to decide that it would be fun to try an Amazon – or two – since we had housed two greys together happily for several years.

A quick internet search yielded a wonderful discovery – a companion bird rescue organization called Mickaboo!  As we all know, Mickaboo wisely circumvents “impulse” adoptions by conducting a thorough adoption process.  Even though we had owned birds for years, we went into the bird care class with an open mind – and had our minds blown.  So many great reminders about food variety and cages and out time and toys – but so much new information as well!  Whoever heard of weighing their bird??  Avian vets and yearly physicals – were they really a thing?  Although the bird class held so much fabulous information, I must also admit to much sorrow and guilt.  Learning that birds will hide an illness or aging until it is too late to help them illuminated why the passing of each of our birds except one (cancer) had been a surprise.  We committed to doing things right going forward.

We received adoption approval on a Sunday.  Amazon coordinator Sophia and I worked together throughout the week to see if we could identify which set of cage-sharing birds might work best for us.  On Saturday night as we were sauntering through the Grocery Outlet, I received an email from Sophia.  A family had contacted Mickaboo to surrender their sister’s birds as she was about to lose her battle with cancer.  They were a bonded pair – a blue-fronted Amazon and a galah (rose-breasted) cockatoo.  Were John and I interested?  YES, WE WERE! 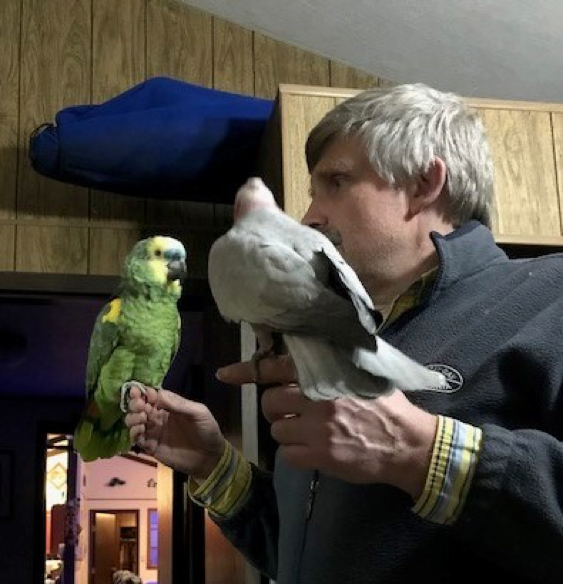 What a whirlwind the next 24 hours were!  Information about and concern for the birds cascaded in a flurry of emails.  Rodney the Amazon was reported to be a man-hater and was known to bite even his beloved owner on occasion.  Beau Geste the galah was so tightly bonded to Rodney that he might not survive if they were separated.  Would the birds be able to stay together?  We just shook our heads – some of the concerns that others raised were pluses for us.  We wanted two birds, and since they were to be “mine,” we weren’t overly concerned about Rodney not being fond of men.  We knew that we would accept and love them as they were, and my husband made the final decision.  “Hurry up and email them that we’ll take the birds before they give them to someone else!”

Nine days after we received our adoption approval, we picked up the birds from their home to take them directly to ours.  We were so excited to meet our new flock-mates, and they amazed us at every turn!  Rodney was stick-trained (I was never so glad to see a stick in all my life!), and he stepped up and willingly stepped into his pet carrier, as did Beau Geste.  Apparently, they actually liked to play in their pet carriers on a daily basis!  The room that housed their cage was remarkably similar to the room they will live in here after quarantine.  They were even familiar with cats!  The birds came with their own very large, very nice cage, as well as an outdoor flight cage, a rolling play stand, and what appeared to be the remainder of a buy one, get one free closeout sale on every bird toy imaginable.  With all the changes these poor birds had gone through with their owner losing her health, a variety of caregivers, and then a trip to a new home with yapping dogs and additional bird sounds, we were prepared for bitey, flighty, and screechy.  What we were NOT prepared for was quiet, calm, and friendly! 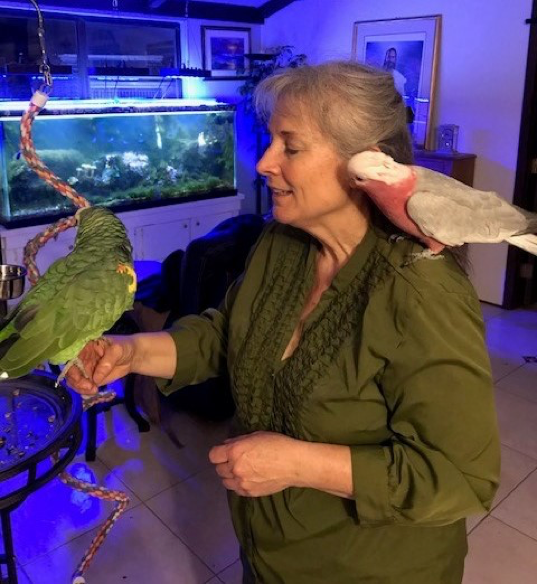 Carolyn, Mickaboo volunteer and family friend of the owner who passed, has been vital in our adoption experience.  She and her husband met us at the birds’ home and helped us gather and sort the birds’ supplies.  She had actually bird-sat them in years past, and she was able to provide valuable (and sometimes alternate) insights into the birds’ background and behavior.  Through surrender papers and vet documentation, we discovered that Rodney had been procured to help stabilize Beau Geste’s refusal to eat when he was younger – indeed, separation may have led to a relapse.  Rodney’s hatred of men had more to do with baseball caps than gender.  In fact, Rodney stepped up on my husband’s hand for the first time just four days after moving in with us.  The truth is, “my” bird is much chattier for my husband than for me, but Rodney and I have made great progress toward trusting each other as well.

From the get-go, we have incorporated the good habits we learned from the Mickaboo bird class.  On day two, each bird got their first weigh-in (my reward was that Beau Geste shot up my arm and rubbed his face on my cheek – I melted and still feel such awe that this amazing bird trusts me enough to be loving).  Rodney’s weight was a bit below average for his species, and Beau Geste’s was a bit above.  With a pelleted diet and consistent fresh foods, Rodney has gained weight and Beau Geste has lost, trends that have been deemed healthy by Dr. Tino at the Medical Center for Birds during their first physicals under our care. 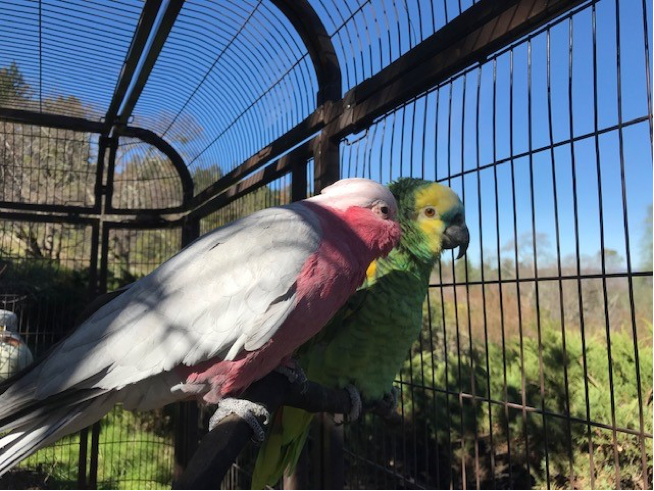 What a delightful rebalance these two mellow fellows have brought to our lives during this crazy time of COVID!  We race home in the evenings for birdie playtime.  All those years of reminding our children not to take food into their bedrooms, and every evening we are eating supper in our daughter’s former bedroom so we can share with the birds.  I think I have sunflower seeds in every single left-hand pocket I own, and more than once my husband has been admonished, “Don’t eat that!  It’s for the birds!”  The most special thing about celebrating the Lunar New Year was discovering that the birds liked mung beans with sticky rice.  Weekends revolve around taking birds to the flight cage, with two birds and two humans enjoying each other’s company as we watch spring unfurl.  Thanks to Mickaboo, we look forward to many more springs with our “mellow fellows,” Rodney and Beau Geste!